“I believe that water will one day be employed as fuel, that hydrogen and oxygen which constitute it, used singly or together, will furnish an inexhaustible source of heat and light, of an intensity of which coal is not capable” – Jules Verne

In 1894, The Times newspaper in London predicted that “in 50 years, every street in London will be buried under nine feet of manure” (Johnson, n.d.). or at least that’s how the story goes. The Times itself has been unable to corroborate the quote, but that doesn’t detract from the problems that were emerging in cities around the world at the turn of the 20th Century. At that time, London had over 50,000 horses involved in public transport in addition to a large number used for the delivery of goods. Each horse would produce, on average, a litre of urine and 11kg of manure each day, which attracted swarms of flies which would spread typhoid and other diseases before it was removed. Given that the life expectancy of a working horse was around 3 years, it’s likely that 50 horses died on the street each day and had to be dismembered in place for easy removal. In short, the transportation systems used in large cities at the end of the 19th Century were polluting the cities, leading to disease and premature death among their populations. The story is often used to illustrate why it is important not to despair, because unexpected solutions to problems often emerge. In this case, the appearance of electrically powered trams and in particular the internal combustion engine solved the problem. As horses were replaced by the horsepower in motor vehicles, the pollution magically disappeared. 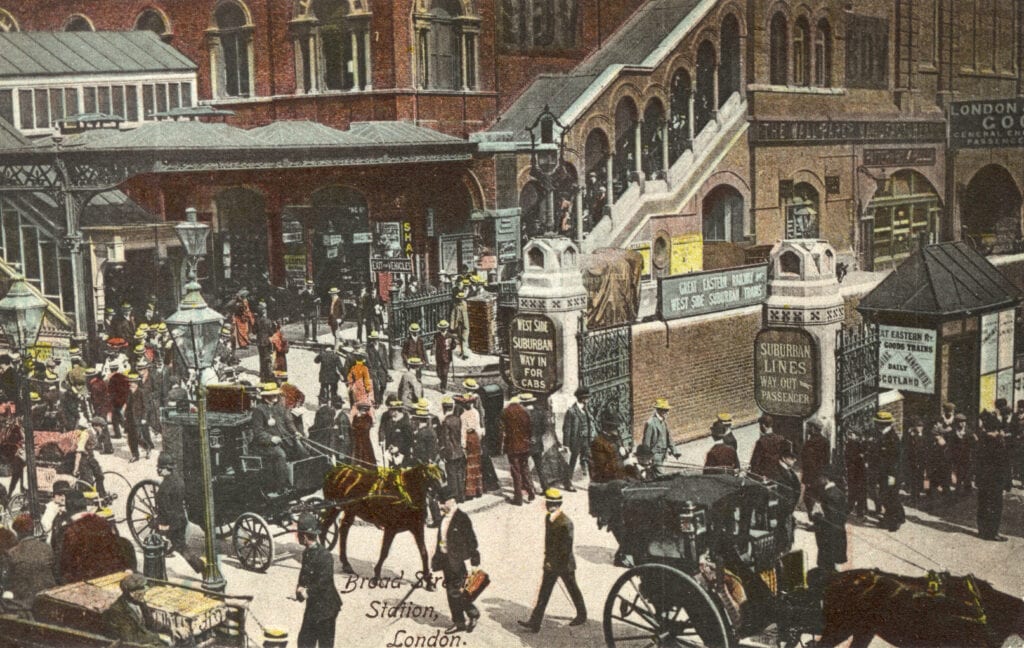 Or at least it seemed to disappear. In fact, as we now know, it became less visible. People thought the pollution had disappeared because it changed its form and became less obvious, and they were grateful for a solution to the immediate problem.

I’d like to use this as an example not of how solutions appear, but of how we can fool ourselves.

Just as, at the turn of the 20th Century, we thought that the internal combustion engine would magically solve the pollution problems caused by horse manure, we are now, 20 years into the 21st Century, looking to battery-powered electric vehicles (BEVs) to solve the pollution problems caused by the internal combustion engine. But once again, we are making the pollution less visible, not making it disappear. Although emissions created while actually driving a BEV are zero, and the emissions caused by generation of the electricity used are potentially low if renewables are used, the energy used to manufacture and dispose of these vehicles makes them a much less sure bet, environmentally.

Recent reports suggest that the emissions locked into a BEV can be more than three times those created when manufacturing a conventional gasoline-powered car, meaning that a BEV has to be driven for around 3.5 years and 50,000 miles before they break even on emissions, and that exponential growth of their manufacture could actually increase the use of fossil fuels between now and 2037 (thundersaidenergy.com, 2020). A study by the Institution of Mechanical Engineers (Baxter, 2020) calculates that the whole-life emissions footprint of a BEV is currently 117gCO2/km driven over the life of the car, and predicts that by 2030 the emissions footprint of manufacturing and disposal of a typical BEV will reduce to 57gCO2/km, with fuel contributing an additional 1gCO2/km for a total 58gCO2/km. The same report calculates that, by 2030 and using renewable fuels, the whole-life emissions footprint of a gasoline-powered vehicle has the potential for reduction to just 45gCO2/km, significantly lower than the “environmentally friendly” BEVs. Renewable fuels can come from processing agricultural or domestic waste, or from combining waste CO2 with hydrogen. Looking at BEVs through the lens of their whole-life emissions footprint suggests that they will be no more sustainable a solution, in the long term, than were internal combustion engines burning gasoline derived from petroleum. So, will we soon be driving vehicles fueled by domestic waste, a bit like Marty McFly in Back to the Future Part II? Probably not, but there is another possible solution.

According to a recent Forbes article, “Hydrogen energy is seeing unprecedented support” with the International Energy Agency (IEA) promoting more use of hydrogen in the energy mix, Germany planning to spend €7bn on hydrogen as part of an economic stimulus package and hydrogen now considered an essential part of Europe’s Green Deal (Hart, 2020). The author notes that detractors of hydrogen dismiss it as inefficient and difficult to handle, and unable to compete with BEVs or with wind and solar for grid supply – but suggests that hydrogen is uniquely placed to become an essential part of a net zero energy solution for the world. To some extent the detractors of hydrogen miss the point. Hydrogen is a transportable clean energy storage vector, which produces no emissions (other than water) at point of use. As a result, it should be thought of as complimentary to grid transmission of electricity, not a competitor for it.

Given that hydrogen is effectively an energy storage method, it is reasonable to speculate that a large part of the future use of hydrogen is likely to be in fuel cell electric vehicles (FCEVs). A debate is raging between proponents of BEVs and proponents of FCEVs. Perhaps unsurprisingly, Tesla CEO Elon Musk has described FCEVs as “incredibly dumb”. Whereas Gregory Guillaume, Kia’s Vice President of Design, is quoted as saying “battery powered electric vehicles can only be a transition [to] hydrogen”. A look at Audi’s 2019 sustainability report (audi-mediacenter.com, 2019) shows that the company is somewhat hedging its bets, with both BEVs and FCEVs mentioned as underpinning the “health” and “climate” legs of their strategy, albeit with 2019 seeing “less focus on fuel cell technology (h-tron) than on electric drive systems” and with the possibility of a future “plug-in hybrid with a fuel cell, which combines low-emission mobility and the ability to cover long distances”. Having said that, Audi announced in 2019 an intention to produce a new generation of FCEVs in volume by the mid-2020s (Kable, 2019). And then on the other hand, their sister company Volkswagen’s website hosts a document that tells us that “in the case of the passenger car, everything speaks in favour of the battery and practically nothing speaks in favour of hydrogen” (volkswagen-newsroom.com, 2020)! Further examples, with Toyota and BMW reportedly pursuing FCEVs while Mercedes and Nissan do the opposite, abound (Sen, 2020). It really seems as though the automotive industry hasn’t yet made up its mind, although many commentators look to hydrogen as a solution for shipping, aviation (Robinson, 2020) and heavy road transportation and not necessarily for light vehicles, for example (Simon, 2020). A possible glimpse of a future in which heavier vehicles are run on hydrogen comes from Jaguar Land Rover. The company is working on BEVs to join its Jaguar passenger vehicle range, but has just launched what it dubs “Project Zeus” with UK government funding to develop fuel cell technology for its next generation Range Rover SUVs (Holloway, 2020).

Why the lack of clarity on FCEVs for personal vehicles? It turns out that there are pros and cons for both types of vehicle. Although Tesla in particular has made great strides in increasing the range of BEVs, range anxiety is less of an issue for FCEV owners. The range of a small BEV is less than half that of a similarly-sized FCEV, perhaps even less in the winter, and a FCEV can be refilled in about the same time as it takes to refill a conventional gasoline vehicle, provided of course that the fuel infrastructure exists – it currently doesn’t. So, convenience might favour the FCEV. Where the fuel cell falls down, at least presently, is in terms of cost. FCEV acquisition costs would have to come down significantly to make them commercially attractive to passenger car drivers, and FCEVs currently cost much more per mile to run. But there is significant potential for reduction in fuel cell costs, as innovation and scale drive the price of new car down, and in the cost of hydrogen fuel itself. At the pump, hydrogen currently costs between £10 and £15 per kg, but the US National Renewable Energy Laboratory has estimated that hydrogen fuel prices could be as low as $8 (£6) per kg by 2035 (Melaina, et al., 2017).

What about emissions? The Institution of Mechanical Engineers study on road transportation referred to above (Baxter, 2020) predicts that by 2030 a typical FCEV will contribute 41gCO2/km from manufacture, with fuel contributing an additional 5gCO2/km for a total 46gCO2/km. So the FCEV has the potential to be 20% cleaner than the BEV – not to be sniffed at in a world where sensitivity to emissions is likely to become stronger. If you believe that the solution with the lowest overall emissions footprint will prevail, and that the cost of hydrogen can be reduced, there appears to be a future for hydrogen powered FCEVs.

If we accept that FCEVs are a realistic proposition, where will the hydrogen come from? A webinar recently presented by Martyn Tulloch of the Oil and Gas technology Centre (Tulloch, 2020) has some of the answers. It envisages a future which includes offshore wind turbines located in the North Sea and UK Atlantic waters, with electricity from wind at least partially powering existing offshore oil and gas installations. In this vision, hydrogen is created offshore from electrolysis using wind power (“green hydrogen”) and from natural gas (“blue hydrogen”), and CO2 created in the production of blue hydrogen and waste CO2 from onshore industrial operations is reinjected into subsurface formations offshore.

This provides hydrogen as a transportable source of power for the UK, whether for domestic consumption as a replacement for natural gas, for powering of commercial transportation or even, one day, for use in small private vehicles.

And this doesn’t just mitigate a pollution problem. It also creates an opportunity for transfer of skills and the supply base from the oil and gas industry. In his presentation, Martyn Tulloch quotes a report that which estimates that Norway could generate NOK220BN (£19BN) annually by 2050, and create as many as 35,000 jobs, by producing hydrogen from natural gas using CCS. Given its geography, the opportunity for the UK is similar. The skills and experience needed are very similar to those used to develop offshore fields for oil and gas.

The oil and gas industry has a lot to offer here. If companies pivot and think of themselves as part of an energy industry, committed to providing plentiful, clean, energy in the years to come, they could find themselves at the forefront of a new energy revolution. Companies that cannot think that way, and remain wedded to hydrocarbons, could find that the opportunity and the market have been snatched by somebody else.

“With a new national commitment, our scientists and engineers will overcome obstacles to taking these [hydrogen fuel cell] cars from laboratory to showroom, so that the first car driven by a child born today could be powered by hydrogen, and pollution-free” – George W. Bush on hydrogen fuel cell vehicles

Hart, D. (2020, June 8). Why Hydrogen, Why Now? Because Climate, Economy And Finance Say So. Retrieved from forbes.com: https://www.forbes.com/sites/davidhart/2020/06/08/why-hydrogen-why-now-because-climate-economy-and-finance-say-so/#56dfaf63749e

Johnson, B. (n.d.). The Great Horse Manure Crisis of 1894. Retrieved from historic-UK.com: https://www.historic-uk.com/HistoryUK/HistoryofBritain/Great-Horse-Manure-Crisis-of-1894/

13 thoughts on “From Horses to Hydrogen”