I’m writing this blog having just returned from a holiday in the UK. Like many of us during this pandemic year, my family and I had intended to travel overseas for our holiday, before Covid-19 changed our plans. At the last minute I was able to book a farmhouse near the coast in West Wales. The weather was kind to us and as it turned out we had a wonderful family holiday. We booked our farmhouse using Airbnb, because it makes the process so easy, and I’d like to use that company as an example of what innovation is really about. Many people think that innovation is about inventing a new product, having that lightbulb moment where something the world has never seen before pops into the inventor’s head. I’m not sure that’s true of Airbnb. It hasn’t really created anything, at least not anything physical. Its software lives on your smart phone, or maybe on your PC, within an operating system or browser developed by somebody else. They leverage your hardware to deliver a service to you. In the same way, they leverage your ISP to deliver the service to you. And, of course, they leverage assets (for example houses or apartments) owned by other people. Airbnb is now one of the largest accommodation providers in the world (Molla, 2019), without owning any real estate. Airbnb is a great example of disruptive innovation, of which more in a future blog, and it illustrates that innovation doesn’t have to be about inventing things, it can be about recombining things that already exist in new ways.

I recently attended classes led by Marc Ventresca, Associate Professor of Strategic Management at Saïd Business School in Oxford, who is very fond of using the above quote from William Gibson. What it means in our context is that much of what we will use in the future is already around us, innovation will recombine existing things into new and more useful forms. In his book “The Rational Optimist”, Matt Ridley describes recombinant innovation as “when ideas have sex” – sex  being the biological mechanism whereby different lineages and mutations are combined to create something new which is more than the sum of its parts (Ridley, 2010). I think this is great analogy for how innovation often works and how it can create something truly new and valuable by simply combining existing ideas. 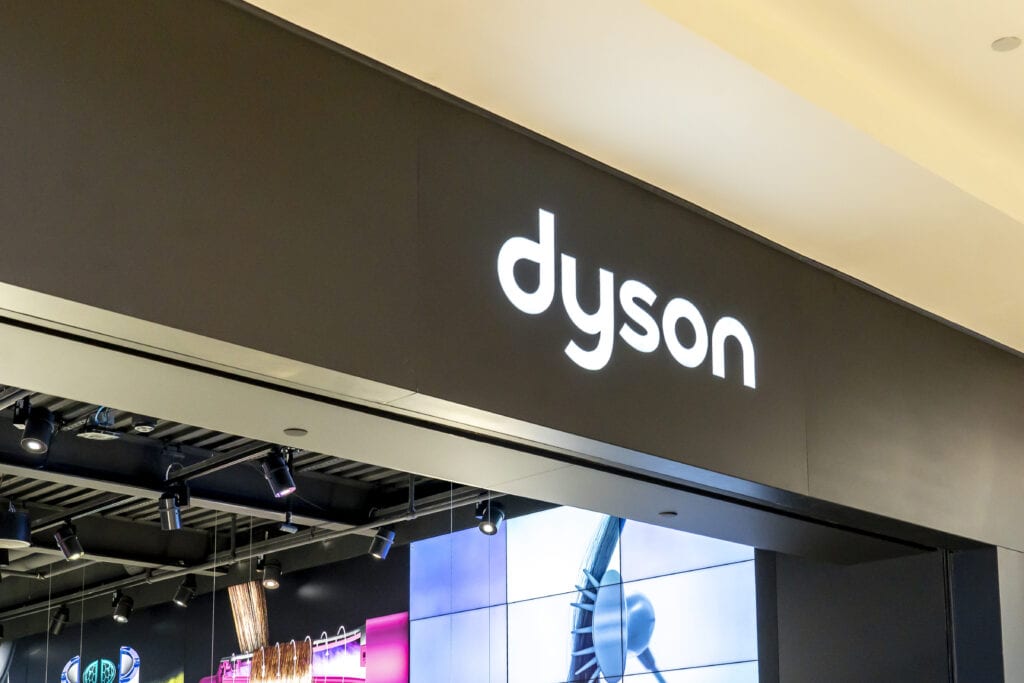 One of the most iconic examples of innovation for the consumer market is the Dyson vacuum cleaner. Striking in its appearance, with bright yellow plastic mouldings and transparent dust collector, it revolutionized its market and launched James Dyson’s company. According to Dyson, he was not initially looking to develop a vacuum cleaner (npr.com, 2018) (Roy, 1993). Being a vacuum cleaner owner, as almost all of us are, he was aware of the shortcomings of existing bagged vacuum cleaners, and these shortcomings appeared to be filed away somewhere in his mind as he developed a completely different product, the “Ballbarrow” – an unusual wheelbarrow design with a ball-shaped wheel to make it easier to traverse uneven ground. Metal parts of the Ballbarrow were powder-coated, and Dyson had to solve production problems whereby the powder would tend to block the factory’s filtration system. Eschewing filters, he turned to a different technology, copying the principle of operation of industrial cyclones to separate the powder from the air and thereby address the production problem. Then came the Eureka moment. Seeing the success of the cyclone, Dyson realised that similar technology could be used to separate dust from air in a vacuum cleaner and solve the problem inherent in existing cleaner designs, namely clogging of the dust bags with small particles. This was the invention, and a brilliant one, but it wasn’t something new. It was a purposing, twice over, of existing technology into new applications. And the invention was not nearly enough.

According to James Dyson, when approached with the idea the directors of his company actually said, “don’t be so stupid, if there was a better vacuum cleaner Hoover or Electrolux or someone else would have made it”! At this point, the cyclone cleaner had been invented, but that was all – his own company was not interested, and Dyson had to pursue the idea himself – which he did. Over the course of five years, Dyson built more than 5,000 prototypes at his home, before he got to a design that worked well enough to be demonstrated to the then-major manufacturers. Unfortunately, they were not interested. It may have been because they were too stuck in their own paradigm and rejected anything “not invented here”, it may have been because they were deterred by risk, or it may even have been because they were too invested in a business model that included lucrative sales of spare bags for their existing vacuum cleaner designs. Eventually, of course, Dyson launched his own vacuum cleaner through his own company, Dyson Appliances Ltd., fully 12 years after building the first prototype. Perhaps the world is changing so quickly now that 12 years would be too long to get to market? Quite likely, but even so the Dyson story serves as an excellent illustration of innovation resulting from recombining existing technologies. It also shows us the difference between invention and innovation. Recall that the invention was the idea, the use of a cyclone to clean the air in a vacuum cleaner. The innovation included everything that followed including the “sweat equity” needed to successfully get the invention to market.

So, what exactly is innovation? That’s a simple question, with a less than simple answer. To many, it describes a new idea, usually an impressive or exciting one. Sorry to disappoint, but I’m going to argue that innovation is not about the big idea. In fact, I’m going further than that – to suggest that most successful innovations don’t really have new or earth shattering technology in them, perhaps a small change here, or a new way of using existing things there – as the examples above illustrate. But those small changes can lead to very exciting results. You see, innovation isn’t really about inventing things. That’s why “invention” and “innovation” are separate words.

Innovation is the process of taking that idea, using it to create value and getting it to market to capture some of that value. As I noted in a previous blog, the innovation process that makes up a value chain. The flow diagram reproduced below shows the linkage between generating ideas, creating value for customers and capturing part of that value for our own organisation.

That’s my view, but is there a simple definition for “innovation”? There is, but it’s not easy to find.

The Oxford Dictionary definition (lexico.com, n.d.) defines innovation as “make changes in something established, especially by introducing new methods, ideas, or products” or “introduce (something new, especially a product)”. Although it’s a bit focused on products, it does suggest the possibility of innovating through “new methods” – which can include new services or business models.

Peter Drucker gave us a definition that seems a lot clearer: “innovation is the specific tool of entrepreneurs, the means by which they exploit change as an opportunity for a different business or a different service” (Drucker, 1993). Michael Porter defines innovation in a similar way: “a new way of doing things… …that is commercialized” (my italics) (Porter, 1990).

Innovation has many forms. In a 2015 article (Pisano, 2015), Gary Pisano shows an “innovation landscape map” that identifies a number of different types of innovation. They are characterised as a function of whether or not they require new technical competencies and/or business models and the image below is based on his article. 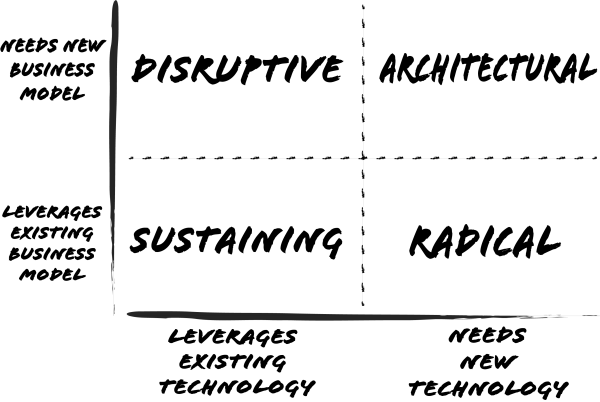 Peter Fullagar, adviser to the UK Design Council, describes the relative advantages of incremental (sustaining) and radical innovation very simply (designcouncil.org, n.d.). Incremental innovation is essential to remaining competitive for incumbents, it makes new offerings recognizable to customers, and it reduces the cost (and risk) of development. This can be at the risk of losing differentiation if there are many competitors. Dominant players often excel at incremental innovation because they already have the customer base and understand the territory. Radical innovation can provide bigger wins and create new markets. Because it allows companies to challenge existing paradigms, it can be particularly useful for new entrants. Unlike incremental innovation, radical innovation often comes from smaller firms who are less well invested in current markets or technology. Accordingly, it will often damage the established, dominant players and in the extreme, it can result in their failure. 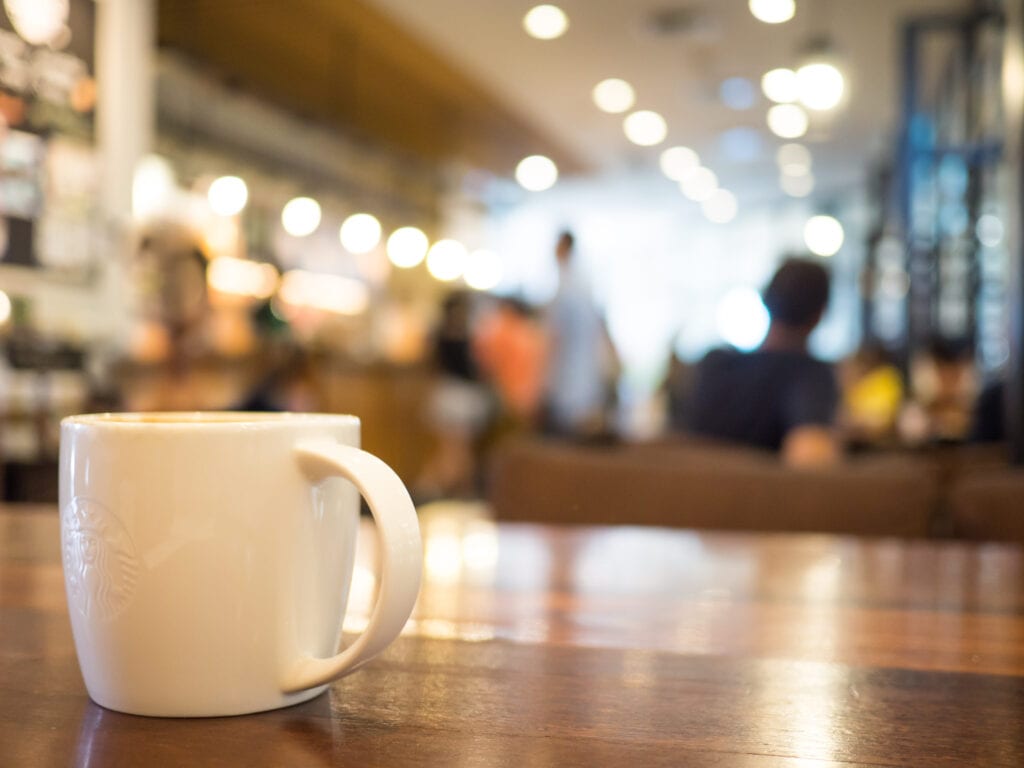 Examples of successful new entrants with innovative business models abound. Starbucks now sells coffee all over the world, from humble beginnings in Seattle in 1971 (Schulz & Yang, 1997). After initially trying to bring good-tasting coffee and at the same time recreate the atmosphere of an Italian espresso bar in the United States, the company changed the customer experience to the comfortable, accessible and unique experience that we all recognize today – while retaining the good coffee. They successfully transformed the expectations of American coffee drinkers, who had previously not enjoyed high quality coffee, and thereby were able to shape the market to their own strengths by innovating how coffee was sold (Ghemawat, 2007).

Before we finish, let’s return to Airbnb. Theirs is not just product or service or business model innovation. They are leveraging platforms which allow companies to create or participate in ecosystems that connect disparate companies and business models, as well as societal trends, to create environments in which new types of innovation can flourish. I’ll return to this, too, in a future blog.

Innovation can take many forms, but it will always include the creation of value – possibly making the customer more money, possibly saving time or cost for them, possibly making tasks easier, possibly appealing to higher-level emotional, personal and social values such as self-actualization or even altruism. The trick is to get from the “good idea” to creating and capturing that value, and, whatever form it comes in, that’s what innovation is really all about. It’s not just about the idea.

A key message here is that an apparently simple question (“what’s innovation?”) invites a complicated answer. Innovation is complex and multifaceted in conception, although it can and should be quite simple in execution.  Over the coming weeks and months I’ll be blogging about aspects of the above and diving into more detail about certain facets of innovation and the innovation value chain. Do let me know in the comments below if there’s anything you are specifically interested in hearing about.

“the pure new idea is not adequate by itself to lead to implementation… …it must be taken up by a strong character and implemented through his influence” – Joseph Schumpeter, innovation pioneer

7 thoughts on “Innovation – What’s That?”